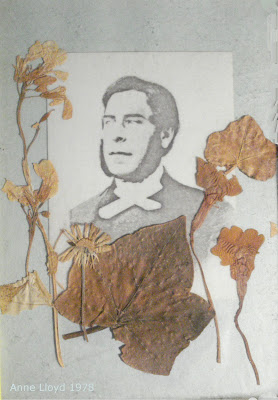 I thought I would post this ABN collage I made ...in 1978. It's interesting how in our past, often there are  glimpses of our future. The image is a photo copy. There was a time when they came out that  ghostly grey. The pressed leaves and flowers I found in an 1906 copy of " The Tenet of Wildfell Hall"  It pleased me to think they had bloomed while Arthur still lived. So indeed, Rev. Nicholls has been on my radar for some time .

For years I thought if I simply string together all the many , many scenes I have written into their correct chronological order, my Bronte novel will be completed

I now realize that is like putting up a fine, sturdy scaffolding and calling it a building

Nope; there's much more to it than that.

However I love the feeling of a new, creative  wave arising within to deal with the situation , to fill out the scaffolding and also, the freedom one has because the scaffolding is there.

This is a process and every step is necessary. I tell people it's like climbing Everest, one step at a time; that's what is required. Charlotte said  something similar when her siblings were dying all about her and so much was up to her...she said endeavored to look forward;  if she looked down or  back around , she'd likely lose her nerve.  My situation is not nearly as dyer as hers of course, but I think I know what Charlotte meant. If I thought about all there is yet to do , I would be overwhelmed and often I am ...the only thing that helps is to get back to work . Keep paddling for shore.

Learning patience has been a great lesson in this experience ...you are leaving on the field, giving much to the project in life force and years, which at ,my time of life, one will never replenished. In such a project, you are asked do to that. But I will point out, one does not get to keep the years and life force if you don't hand them over for what you deem worthy of the gift. They will be spent or not, but you don't get to hoard your stores, a what would be the point? The evening will and is drawing in...go out with a blaze instead of a flicker, go out open handed instead of in a fist.

I can see where's the book is at and is going and that nurtures me greatly. But I well  understand why it's harder for others to wait. They can't see the vision . I wish they could and eventually I hope  they will , once the book is done. All I can do until then is keep working.

In Praise of Papa  Brontë, and 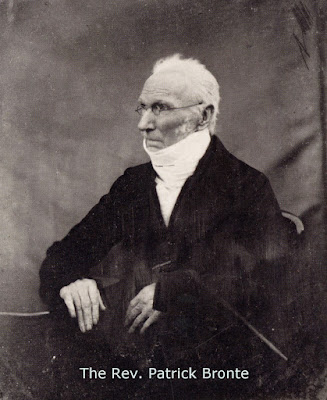 Anyone writing about the Brontes, or is simply  interested in the family ,  owes author  Dudley Green, many thanks. He collected  and edited Patrick's letters, which are a treasure trove,  and Mr. Green also  wrote an excellent biography of Rev Bronte as well. It happens also to be very good over all portrait of the family. As I say else where, Mr. Green's rendition of the events leading to Charlotte's wedding( just as an example )  is better than some books about Charlotte! His Papa centered  books are a must for the  Brontë, enthusiast, in my opinion.

I've uploaded a number of Romanov videos lately. The family is reasserting themselves again! I very much look forward to painting them after the novel is finished...and Arthur and Papa Bronte too...eventually Charlotte, of course.

The titles are live links

The Romanovs.  Olga and Alexei : A sister's smile


The main reason I am posting so many Romanov videos is my internet copper wire  connection will end ...like tomorrow. It's an old system, my older PC is not in great shape either , however it's the system I know and it works. But copper, they tell me,  is out . Indeed, I maybe one of the last ones holding on to my landline to the end. Well the end is here.  Consequently  I have been busy finishing  and uploading a good many  Romanov  videos which were " in production " , some for years. I'm gratified the videos  get a good many views and somehow have I nearly 500 subscribers !

Okay, have a great summer, see you later, and now  it's back to work!