When my husband and I visited NYC to see the Morgan Library's wonderful Charlotte Brontë exhibit ,( which we did a number of times)  I would always look up  longingly at the show's beautiful street banners hung up and down Madison Ave.

Now I have one!

My husband remembered that after a show closes, the Morgan offers its street banners for sale and  he got me one! It looked smaller while hanging high above the pavement! It's 7 feet of fabulousness , now hanging in my home. It makes saying goodbye to this once in a life time exhibit  a bit easier.  I feel I grasped a few feathers from the fire bird so to speak. The show is not entirely gone


Other interesting news, I found my Brontë Society life time member card! I thought it had long ago disappeared ...but a bit of cleaning  and there it was, tucked away into that " some place safe " we put important items... A place  so safe, we often forget where it is ourselves!  It says I was a life time member since Jan 1978, however I was a fan long before that. 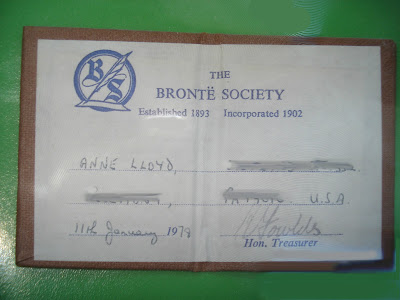 Though they kindly looked a couple of years ago as my request, The Brontë Society couldn't find a record of my membership ...really glad I found the proof on this end. It's great to have it back. At that time, the card  was made up as a little book, such as the young Brontës would make. Adorable 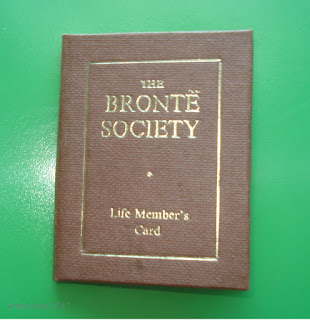 
While writing  and  researching my novel, I love to collect  old Brontë Society Transactions...the booklet the Society publishes ever year with news, new historical findings and focus pieces . It's remarkable what you find. The old ones aren't that costly and are available on eBay or Amazon. Often the articles from BST will be referenced in a book. It's great to see the original article.

Lately I have been reading the original reviews of the Brontë sisters books as published in contemporary periodicals . Reviews were very different then. They were long, think pieces and not every book got one. Indeed, instead of bringing  a book to success, a review would come about after the book found favor on its own. Getting one review would be an achievement. This is why when Charlotte told her father, Patrick, her book was printed and had a number of reviews, he was impressed.

Because reviews were often penned after a book made its own way, the whole plot is often shown. They didn't know the meaning of "spoiler  alert!"  A review was a comment on what you have likely read already.

They are eye openers...particularly those found in  "The Christian Remembrancer" by Ann Mozley.  Her anonymous reviews seemed to be the ones that stung Charlotte the most.  She actually wrote a letter in response to one.  She had tried to do that before, but her  publisher advised against it. This time Charlotte didn't ask them, she just let fly. Her letter  was written  in July 1853; a low time for Charlotte. Mr. Nicholls had finally left Haworth, and while the situation between Arthur Bell Nicholls and her father was stressful and irksome , having a love sick, would be suitor was  at least some support....now " he's  gone-gone..." as she wrote to Ellen.

Charlotte's answer to Miss Mozley's  harsh review of " Villette " in a way  trail blazes  the  path  Mrs. Gaskell would later take. In that CB paints herself as a piteous figure( the sole survivor of a family of six). This was how a romantic writer, more suited to the early 19th century,  tries  to make herself understood by mid century Victorians and Mrs. Gaskell would expand upon it


Okay! Back to work!