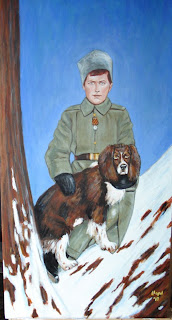 My painting of Alexei Nikolaevich and Joy is finished!It is 36 inches tall by 18inches wide. I had expert help with his coat colour as military uniforms need to be correct. It's type of grey /green...not easy to achieve. A friend made an interesting remark. They said Joy looks sad because of Alexei's death...though it seems fanciful, I was taken aback. Because I had tried for weeks to get Joy to look alert as he always did, but I could not get the sadness out of his portrait. In the creation of art there is the usual time line of course, but art is not limited to our usual sense of time by any means. So it's not really fanciful to say Joy's sadness comes though, in spite of my efforts. Many times a painting has a mind of its own and the artist finds themselves a facilitator of these other ideas...at least that has been my experience .
Art is such a mystery...even as we make it 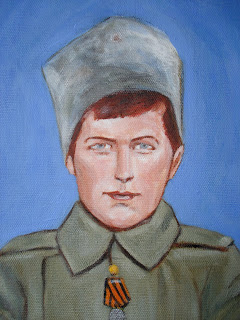 Joy, of course was the only one marked for death the early morning of July 17,1918 who some how escaped . Here is what Baroness Sophie Buxhoevedon related about meeting up with Joy in Omsk while she was with the British military, who helped her leave Russia

General Dietrichs told me that the Tsarevich's small spaniel, Joy, was with him at Omsk. The dog had been his small master's constant companion, and had been taken both to Tobolsk and to Ekaterinburg. At Tobolsk the Tsarevich had often been highly amused at the dog's contempt of the Kommissars' orders, for whenever Joy espied me passing the house he would manage to slip through the gates and greet me boisterously.

The poor little beast had been found by the Czechs when they took Ekaterinburg, wandering about half famished in the courtyard of the Ipatieff house. He seemed to be always looking for his master, and this had made him so sad and dejected that he would scarcely touch his food even when he was lovingly cared for.

I went to see Joy, and he, evidently connecting me in his dog's brain with his masters, imagined that my coming announced theirs. Never did I see an animal in such ecstasy. When I called him he made one bound out of the carriage and tore down the platform towards me, jumping in the air and running about me in wide circles, when he did not cling to me with his forepaws, walking upright like a circus dog. General Dietrichs said that he had never given such a welcome to anyone before, and I attributed this solely to the fact that my clothes, which were the same that I had worn at Tobolsk, had still kept a familiar smell, for I had never specially petted him.

When I left, Joy lay for a whole day near the door through which I had gone. He refused his food and relapsed again into his usual despondency. What had little Joy seen on that terrible night of July 16? He had been with the Imperial Family to the last. Had he witnessed the tragedy? His brain had evidently kept the memory of a great shock, and his heart was broken. It was pathetic seeing this dumb friend, who brought back the memory of the Tsarevich so vividly. Little Joy was well cared for. He was taken to England by Colonel Rodzianko and spent his last years in the utmost canine comfort, but still never recovered his spirits 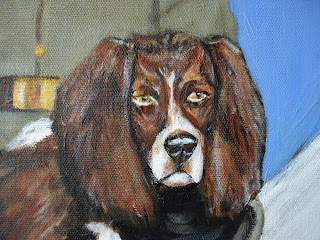 We know Joy was especially exuberant dog because of his very name: Joy, and because of many anecdotes. So it's extra sad to learn of his deep depresstion afterwards. I believe his habit of giving the guards the slip is what saved him that night. And perhaps Joy was "out" yet again when that knock on the door came while Dr. Botkin was writing his last letter. I believe Alexei would have been hugely pleased his Joy escaped. Joy had been almost a surrogate for Alexei Nikolaevich for years already. In that the little dog could throw himself heedlessly into any physical activity, while his master certainly could not...and Alexei always loved it when he did. 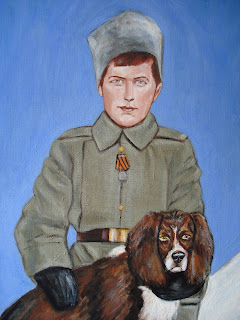 I haven't spoken about Alexei Nikolaevich's portrait yet. It came though almost immediately and that surprised me. Usually one has at least a struggle. But not this time. I had more difficulty with his coat colour and Joy. I always make a video of a paintings process and the story of its subject and here is the one for Alexei Nikolaevich and his Joy.

A close up portrait of Olga Nikolaevna is next 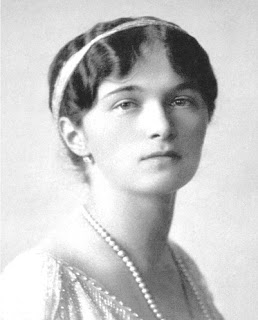