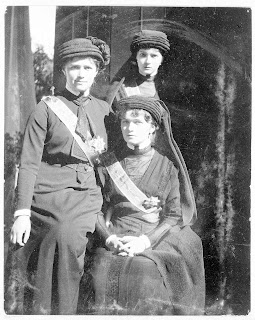 As readers of this blog know, I'm current painting Grand Duchess Olga, Tatiana and Maria Nicolaievna Romanova using as a reference a photo of the sisters taken in 1915 as they await transport to the funeral of their father's cousin, Grand Duke Konstantin Konstantinovich . His was the last state funeral of Imperial Russia .


In three days time , I will have been working on the 38X48 painting for 6 months!

People have stopped asking me when I will be finished and it's just as well, since it seems I'm the last to know. I thought I would be done long before this. But every few painting sessions I see something I had previously missed and then it has to be included of course. Or I see a mistake and that has to be corrected naturally...


However after saying all this I must add how rich and rewarding this experience as been...the challenge is how much enjoyment can one stand? I have already exceeded my wildest hopes. It would be temping to simply say " enough". But then the question is : how much river boat gambling can you take? Because once you are fairly far along, the courage it takes to risk what you have achieved in the hopes of gaining more can be exhausting .

Lucky I was always able to reach the next stepping stone. But one could easily lose the one and not achieve the other. Once a new plateau was reached, I would think " well that's great. I'm finished in that area." But after awhile I found I would see the need go further....particularly if other areas were improved ....and every time one changes one thing, everything had to be reconsidered. So many times there was nothing for it, but to gather my courage again and address the situation...almost always the soundness of this decision was shown and quickly.


I got the girl's likenesses quite early and this was vital for the sake of encouragement. Then it was a matter of putting in the time for everything else. The photo is very rich in detail and the arrangements of the sisters is also fairly complex in that Maire is neither standing or fully siting ...she is half siting on Olga chair's arm.

This was a habit of Marie's. It's touching to see she has her arm around her eldest sister. Marie's thumb is visible on Olga's right forearm. Marie was a warm and loving young woman. But because of her unusual sitting position, her torso is twisted. That makes it tricky. Part of her body is turning away from us . So I was thrilled when just a day or so ago I was finally able to make sense of the center of the painting, where Marie's order of St. Catherine meets Olga's right shoulder.... and we can see Marie's position properly


Painting the red sashes helped a great deal. The sashes don't go straight across...they go up and down and over in wavy lines. Just this item alone has been fascinating to paint...to sort out what one "sees" and what is there. Over and over I receive benefits from doing just what the photos says....and still I don't feel limited by that.

Perhaps because I'm adding colour, or simply because a painting of a photo is not a photo ...nor can it be no matter how exact. The last major item to be painted are the girl's Order of St Catherine, really almost the icing on the cake.

When will the painting be finished? I can't seem to say. However I can promise that when it is, no one will be disappointed in the result.
Posted by Anne at 10:07 PM 3 comments: