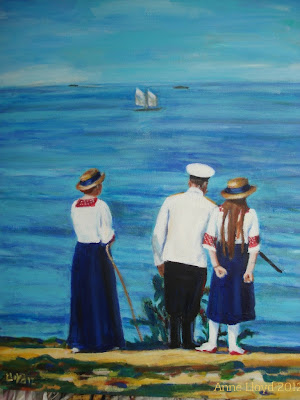 At 16 x 18 it's very small for one of my Romanov paintings.. It's almost more landscape than portait! It's interesting because we don't see their faces, they become shapes like the sea and land around them. One has to make the portait of a known stance,with the body , rather than a face. 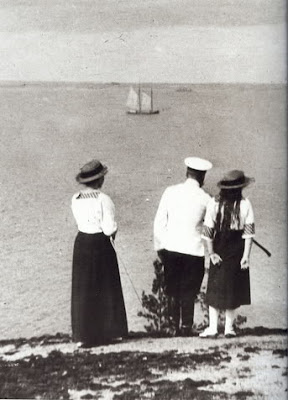 I've always loved this photo of the Tsar and his younger daughters, Maria and Anastasia, during one of their cruises in the Crimea in 1914 , just  before WW1. 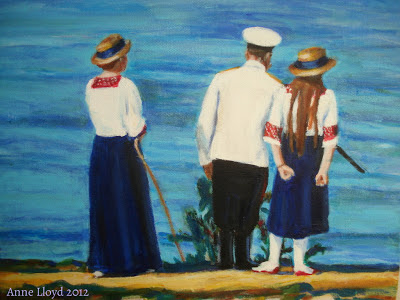 The Tsar  is pointing something out to the girls

Of course there is a video!  .

It has a number of water colours as well as the painting. The music is "The Kite Song " by Patty Griffin


My current painting is giving me the usual fits. I've spent 6 weeks on Alexis head and torso! ...but I'll get it and I believe no one will be disappointed when its finished ...though Lord knows when that will be!  The paintings have their own time tables and I have learned to just go for the ride

But since the last  post   there's been a Brontë interverntion!.

For over 3 years, my art has been Romanov related. Now the Brontës want in on the fun....specially , Charlotte Brontë and her husband, Arthur Bell Nicholls.

People don't seem to know the author of " Jane Eyre"  was married. It was a  very happy, but tragically short marriage because she died of an infectious disease only 8 months after the wedding.

Arthur Bell Nicholls however lived another 50 years. He never got over the loss of Charlotte, indeed he died with her name on his lips.

We have a staggering amount  of Brontës items today and it is thanks to Mr. Nicholls for  keeping them .It was said he viewed these items as being simply personal  mementos...but I believe Charlotte loved that fame  blindness he had. Most  of us are like putty before it.  And if we now have these Brontë  manuscripts , art work and even clothing for all time, I don't think we can  begrudge Arthur Bell Nicholls the first 50 years.


Their love story   has as many twists , turns and high emotion as any Brontë novel. It's always been one of my favorite from Brontë history.  Mr. Nicholls is just getting  his due in the last few years, but I've always loved how he adored Charlotte and could not  help but allow all of Haworth see how in love he was.

It very likely only that level of emotion would have won a Brontë! They wouldn't notice anything less! 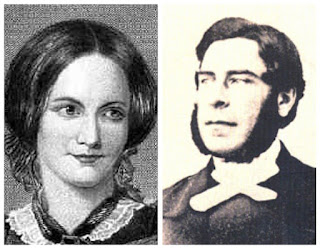 So a portait pair of Charlotte Brontë and her husband, Arthur Bell Nicholls, is in the pipe line


It will be a real challenge to produce a portrait of Charlotte  because I will base it on a drawing. But if I heeded problems, I would not have started Romanov painting! My lack of training keeps me from knowing how tough it will be...and once I'm in it, I painting like mad for shore and somehow get there

More Romanov art ahead of course! After the Tsar and Alexis, I will be painting Alexandra and so the family will be complete....but at my rate, it will be awhile!
Posted by Anne at 11:48 PM 5 comments: