Let's talk about the writing 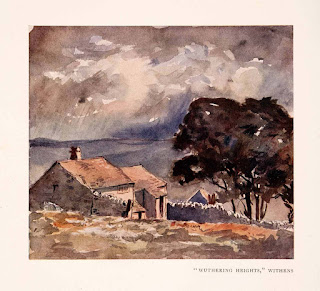 When people talk about Brontë novels, it seems to me , the discussion centers on the exciting  Gothic plots. But let's look at the writing....which is amazing in my view

It was a deep voice, and foreign in tone; yet there was something in the manner of pronouncing my name which made it sound familiar.  I turned about to discover who spoke, fearfully; for the doors were shut, and I had seen nobody on approaching the steps.  Something stirred in the porch; and, moving nearer, I distinguished a tall man dressed in dark clothes, with dark face and hair. He leant against the side, and held his fingers on the latch as if intending to open for himself.
‘Who can it be?’ I thought.  ‘Mr. Earnshaw? Oh, no!  The voice has no resemblance to his.’ ‘I have waited here an hour,’ he resumed, while I continued staring; ‘and the whole of that time all round has been as still as death. I dared not enter. You do not know me? Look, I’m not a stranger!’ A ray fell on his features; the cheeks were sallow, and half covered with black whiskers; the brows lowering, the eyes deep-set and singular.  I remembered the eyes.

That last sentence is so simple, imperative and modern, it is startlingly. This is, of course,  when Heathcliff returns. Nelly Dean is speaking. She knew him from childhood, yet she was unsure who this was... it was  the deep memory of his eyes that convinced her.

He leant against the side, and held his fingers on the latch as if intending to open for himself.


Reading Brontë....they don't use Victorian language because they are not Victorians...if anything they are romantic Georgians , a spectacular throw back to an earlier age, its last, brilliant crescendo ....indeed, most, if not all the novels, are even set in that earlier age.  If Charlotte had lived, she would have likely  found it difficult to keep write as she would  in the increasingly straitjacketed Victorian years ahead. The cries of " coarseness ! " would have increased  to even more of din as the age wore on.

As it was in 1857, Mrs Gaskell spent a good deal of ink  to  apologize  and make excuses for Charlotte's supposed "coarseness" when she was dead...One can see  the difficulties CBN , the living author would have had.  The Victorians were embarrassed by their free wheeling ancestors....a clamp down trend that  continued  to tighten until  the 1890's began to loosen it  and WW1 broke up the social straight jacket altogether.

Renewed interest in  the Brontës cropped up every decade during the last half of the 19th century as almost a permissible relief ( They were dead and long ago after all) ...it's fun to read the Victorian articles declaring, " Surely, interest in the Brontës must finally wain? " lol...Why, no, it won't and it hasn't.

What is also interesting in reading  the fragment of Charlotte's last effort," Emma", she seemed to be  returning to her "sober as  Monday morning " kind of novel. She  always answered one kind with another. There was  quite "The Professor" and then " oh damn it! I'll write as I please,"  "Jane Eyre.". The purposely prosaic "Shirley"  and then she indulged herself again with " Villette" ....an emotional  see saw which answered to Charlotte's duel nature of  forbidding sober sides and molten lava fount  lol

Perhaps it's because I'm writing myself ,and for years now, but I see and experience reading differently ...and my admiration for the Brontë's writing grows. As I have said, if you would know these young women, read their books.

In researching for a historical novel it's a mistake  to only look for information....information and facts  are vital of course, I stick to them ...but you must stop , consider, even dwell on,  how your protagonists felt. That  is what bridges our time to theirs. How such information as you just read in a source material, would have effected them emotionally? It's simply information to us; to them it could be a life and death development .

The aim and point of an historical novel is to show the reader how the people felt. If you have the desire to show that, you should do well, or at least be able to jog on. If it wasn't for the emotions in the story, my book would be three pages long. But I have read about this story for decades,  written about it for years and have talked about it for hours at a time. Emotion is the jet fuel . 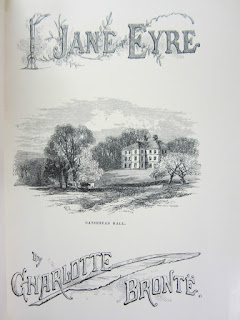 Meanwhile I'm working away. There is awhile yet until it's done, but the pieces/ scenes  are coming together. What is interesting is running into an idea or insight  placed in different scenes. Such as the observation that in all the eight years Arthur was at Haworth, before his proposal to Charlotte, there was never a moment where he could declare himself, until he did. Arthur did so at the first real opportunity.

It was only a little over a month into Arthur's  Haworth career when Mr. Robinson sacked Branwell . So there were the years of young Patrick's decline and the ensuing domestic upset to go though. Then everyone is dying , then Arthur learns Charlotte is a world renowned author, with London calling for her presence. ( How even further beyond his grasp she must of seemed then.) So it was a bit ingenuous of Papa to storm Arthur had " long hidden his aim!". When during all that turmoil could ABN have spoken up?

This insight could be placed in a number of areas and was. Now I have to choose exactly in which scene to place it for good. I love also how things mentioned earlier come into play later...that redoubles the effect later. I have some themes that pop up and develop though out the book.

I have been thinking of painting Romanovs again...it's been four years ( amazing) since I finished my painting of the Tsar and Alexi. I do intend to take up painting the family again some day. It's too much fun not to! When you engage in a creative project, be it painting or writing, you truly enter into your subject's world. Meanwhile I recently uploaded a new video