Nicholas, Alexis and the River 1916

The last 2 weeks I was aware that  in a sense, a  window was closing . The painting was ready to be finished. So I painted a great deal near the end. The painting at the end is indeed  the most intense. Everything must be resolved and the best you can do. You can't say " I'll deal with that later." There is no later. It's an exciting time  really

Alexis's portrait  was smiling and laughing for most of the nearly three years. This was a happy time for him. He was in fairly good health and  with his father all day.   I intended to have him smile. One of the remarkable aspects of Alexis was his great merriment when well ;even hemophilia could not damping  his joie de vive.

But in the end the painting would not have it and he did have a serious side. Finally this portrait emerged. Now I have a portrait of  a young man who knows pain intimately and consequently feels empathy for the viewer who may not be as experienced as he  in enduring pain

As my husband says , Alexis looks right though one . We all have an ache. He sees it . Because of his disease, Alexis was a passion barrier well before captivity and the cellar .

With Nicholas I wanted to show the older Tsar as best I could . I needed every bit of the 34 months to gain this portrait . I was constantly refining him.

It's now out of the studio and  hanging in the gallery. It feels odd  and lonely in the studio without  them. This is what it must be for empty nesters! lol

I'm very pleased with it and grateful. It's great to have battled it though to success. Often I was painting in a mist. But the answer is to just keep on . Many thanks  to all those who bravely kept asking after it year after year ! lol

To see it larger,  open the photo above in a new window

Of course I have a video for the painting. It's been ready for years, just awaiting the final photo

This link will take you to its You Tube page


My next Romanov painting will be of Empress Alexandra to complete the family . But before that, I will be painting Brontes! They have been waiting two years!


I will be painting  portraits of  Rev. Patrick Bronte, Charlotte Bronte and  Rev Arthur Bell Nicholls. I also plan  to paint  at some point the interior of the old Haworth church before it was pulled down in 1879. 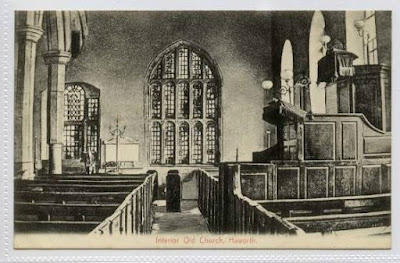 There are two old postcards which show either side of the church. The most common one , ( pictured above )shows the old pulpit .  My plan is to put the two  sides of the two postcards  together to make the whole

But before all that I will be working full time on  the Bronte novel which I have been writing since Dec 2012. Up to now I have been happily  skipping  here and there, gathering scenes like moor land flowers.

Now I will be putting what I have together and fill the holes. Luckily for me I have only to follow the the events time line these real people lived . The hard  part is to get the sequence exactly right.

Currently I'm making a study of Charlotte's London visits  when famous and after losing her siblings , what happened when. People tend to lump the  London  events together, I know I did, but that's not good enough.

Every event in the book  is like a link in a chain. It must be in its rightful place  or it ruins the rest . There is plenty of room for creativity found in  fleshing out this time line spine.

I really don't see this book  being finished any time soon, but I'll have a better sense of that after pulling it together for awhile

I tell everyone, oh write a novel! It's FUN

For the most part it is the greatest  fun. But dear Reader when I have to deal with Charlotte's illness and passing, just as she has at last  found love and happiness,  it is not  fun. It's  rough, sad work . I believe this one of the reason's this part of the Bronte story is often glossed over..it's so damn sad .

But this is also a  story of redemption, of joy in grief . Because  in my opinion if one asked Arthur Bell Nicholls would he choose again to win  Charlotte Bronte, be her husband for so short a time and then  have to suffer  those 50 years of grief,  Arthur  would say  " yes, always yes"