Within days I will be signing my painting of Tsar Nicholas and his son Alexis 1916  . I'm doing the medals, always the cherry on top. I started this painting in July of 2012

I have been working on Alexis almost exclusively  since Sept 2014. That was when I had completed work on  the Tsar and  then realized  my Alexis portrait , which  I thought was finished,  was  now not good enough  to stand next to my portrait of his father.

I posted a new  portrait of Alexis  in Dec 2014, which was nice, but far too young. It was the Alexis of 1912-13. He was maturing rapidly during the war...so after trying to age the portrait, I started from scratch...again

There is an painting  practice  called " a painting a day."  I believe the idea is to loosen one's painting  up. One can't fuss over a painting  if it must be done in a day. Well I need nearly 3 years to get loose it seems lol

But it has all be worth it. I'm thrilled with the results  and I will be posting the painting and its video shortly. This was the Alexis I had to paint towards .

My sister asked me a good question ;  How does one  know  when a painting is done? Well it's a feeling, but mostly it's when you can't see any more  mistakes to correct ...all the problems have been solved .

You have to understand something to paint it , but I find I have to paint something to understand  it....and one cannot gloss anything over because it will effect the whole. You can ignore a problem , but eventually you will have to face it  and resolve it.  I often find the  trouble is not at the place  I'm painting. The mistake can  start  else where and  be carried though to another part of the canvas

Next up will be the Bronte paintings of Charlotte , her father, Patrick  and Arthur Bell Nicholls . I have to say I believe these pictures  will be better for the waiting as I have been writing the Bronte novel all this time. That has to enhance  the paintings imo

My  writing and research for the Bronte novel  goes on...ever more to discover in Church  and Irish history.

In writing , I love weaving together Bronte events from years before and have them effect drama later. That is like life. We tend to follow a pattern of behavior. We tend to effect re-dos with a new cast and with various results . Only by knowing Bronte history backwards and forwards can this be done and by  reading and thinking about them over years.

Also with historical fiction it's my belief one does not have to stick to the known facts; but what we surmise  and write must fit the known facts. The point is to flesh out the known character, not supplant it with another.  Research is vital

In my research  I have discovered St Michale's  choir and organ  loft was over the communion  rail in the Bronte's time. This is  hugely important as a pivotal scene takes place at the rail on Whit-sum 1853. It's fascinating to learn it was a far  more confined space than we would expect

The choir and organ  loft was moved over to the left  side and further away from the east windows during Rev Wade's  time. We think of Wade pulling down the old church just as he arrived, but indeed he was there 18 years before the new church was built. In his time the rail was more open and there was an eagle lectern . This makes me think Rev Wade was a high churchmen .

Looking at  Irish history;  I believe one cannot understand Patrick  fully without investigating  the Irish rebellion of 1798. He was 21 at that time and it had to have an impact. It is considered one of the most brutal and that's saying something.

Irish history effects Arthur as well of course.  Arthur takes up his post in  Haworth just  before The Great Hunger of the 1840's  begin. His Irish home country was never the same afterwards.
It had been a busy  commercial area, but after the 1840's it became something of  a backwater.

Arthur also takes up his curate duties  just weeks before Anne Bronte finally leaves the Robbinsons and  Branwell is sacked...So  the great dramas  of the Bronte's   later lives  begin  right after Arthur arrived on the scene.  He was witness to much


Arthur also became Haworth's curate  just before  his fellow  Tractarian and leading light of the Oxford movement  , John Newman,   left the The Church of England to become a Roman  Catholic.

Up to that point Tractarians  and Evangelicals like the Brontes could coexist ,if uneasily, within the church.  But when Newman decamped for Rome, all the Evangelical's suspicions  and fears seemed fulfilled ; Tractarians were stealth  papists after all . Hatred exploded between the two groups  and  raged for decades.

I wonder if Rev Bronte would have even  agreed to having  a Tractarian  curate if John Newman had made his move before hand. But when he did, Nicholls was already installed  and  proving to be a hard worker.   Also Rev Bronte was blind at this time. How many others  would take such a post?  Beggars can't be choosers.

Nicholls wasn't in a  position to be choosy either as he wanted to be ordained and he  needed a curacy  and in Yorkshire  before hand .  Turns out the  Bishop of Ripon liked to create Irish Tractarian curates from Trinity . Arthur filled that bill admirable.

Just as Bronte was helped to Cambridge  by men wishing to  further Evangelicalism 40 years before, Tractarian clergymen wished  to see those who believed as they did populate the offices and livings of the church.

We are in a Golden Age of Romanov photo releases. Stunning, never seen before100 year old photos  of the last Tsar's family are appearing daily on the web. It's a feast for the Romanov fan. There's nothing like  new to oneself Romanov photos. They both shock and affirm one's  vision.

It can't last, someday the last photo will be seen...but let us enjoy it while it's on!

My friend, Helen Azar, has released her third book in her Romanov  "In their own words"  series of OTMA translations . It's Olga's diary for 1913 with wonderful footnotes. Helen  has a seeming affinity with the Romanovs and each of the  girls has a  distinct voice which thanks to Helen is now available to the English only reader . 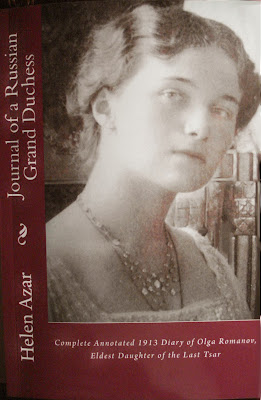 Here is a link

It was imposable of course. A Grand Duchess did not marry a navel officer...at least not in 1913... witnessing Olga's struggle in her diary  is touching. She attended her beloved's  marriage to another young woman. Being royal meant perceiving this as a boon and the best that could be hoped for. Olga understood what was expected of her. She and her siblings belonged to the State...even after the Revolution , perhaps even more so

Be sure to check out Helen's other Romanov translations and this fall Tatiana's diaries and letters will be released with Helen's co-author' and  Romanov expert,  Nick Nicholson's  wonderful  foot notes . They are a dream team for the Romanov fan !


Okay back to work!