I have recently begun making quick Romanov sketches besides my paintings and find them so enjoyable, I decided to compile a book of them called : Romanov Sketchbook. 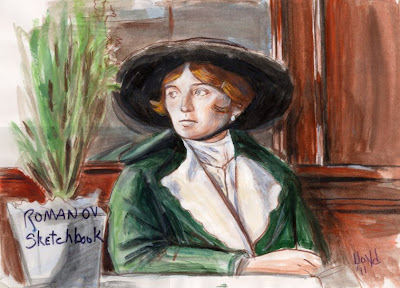 Olga Nikolaevna on board the Rus 1918

This piece is based on the last known photograph of Grand Duchess Olga Nikolaevna taken on board the ship, Rus in May of 1918. After weeks of separation, Olga, her sisters , Tatiana , Anastasia and her brother Alexi were on their way to join their sister Marie and their parents in Yakerinburg. The family and four others with them were to die there on July 17, 1918

This is an especially poignant image Not only because it's the last known one of Olga. But also because it was taken on board a ship...and one remembers how much Olga Nikolaevna loved her family's yacht, the Standart . What a difference here and who can guess her thoughts? 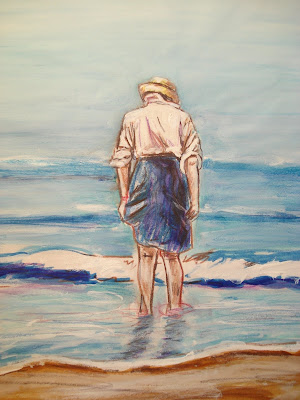 This watercolour of Marie is based on a photo from a group of photographs taken of the family on the Crimean coast in 1916. It seems a rare impromptu day for the Romanovs as they are at the beach in their street clothes! Marie raises her hem as she wades in the waves. The wind was fluttering her collar and I have that as well . 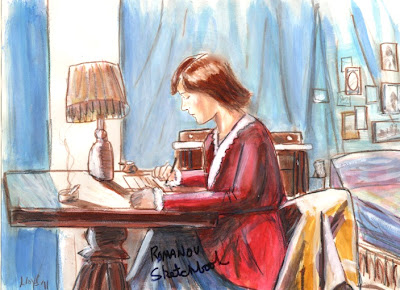 This sketch is not based on a photo. But was inspired when I read a quote from one of Titania's letters in captivity. She wrote these days were hard , but....... " God will surely help us and we will meet in better times" .

While it is not based directly on a photo of Tatiana , I did use a photo of Anastasia sitting at this desk in the girl's bedroom as a reference. I will be making a number of images about the time where we have no photos...the family's final days

After 8 months, my 1915 painting of Olga , Marie and Tatiana dressed for the last Imperial Russian state funeral is completed and I will be doing a photo about it shortly.