"My Heart is in Haworth" My Brontë stories

For the past ten years I have been writing a Brontë
novel from the view point of Charlotte's husband, Arthur Bell Nicholls. Well, I thought I was writing a novel. What I now find is I have been writing many, many Brontë short stories that run from 1798 to 1906. The collection is called," My Heart is in Haworth. "
I have always meant to weave these stories into one narrative and have tried to do so for years. But so far they stubbornly refuse. So I'm now  publishing them as they were written, and posting them periodically on this blog.
I have decided to do it this way because I'm tired waiting for this book too! The time is now on the platform I have.
The stories are offered to the public for free,but they are copyrighted of course. ©
Below is my first installment. "Miss Emily's stone" set in 1854.
The book hasn't been written in chronological order by any means. In one writing session I could zip to two or three different decades of the story and often did. So it is in keeping with the endeavor that my writing doesn't appear in an orderly timeline either.
There are far more romantic and dramatic scenes than this one to be sure. But this one elbowed itself to the front of the line!
The scene is the fall of 1854, the Nicholls have returned to Haworth from their honeymoon in Ireland.
At this point it is important to say something about Arthur Bell Nicholl's appreciation for poetry so that part of my story doesn't seem fantastic. Arthur did not write poetry. But he was sensitive to it and utilized his fine voice to recited it for friends and family most of his life.
We know this because Rev. George Sowden , the younger brother of Arthur's great friend, Sutcliffe Sowden, recalled Arthur did so a great deal and that....
" On one occasion, he repeated by heart, from the beginning to end , and without a single mistake or a moment's hesitation, Tennyson's long and exquisite poem "The May Queen" With the charming Irish pathos which he threw into it, it was delightful to hear."
And we know George wrote this because the dedicated research of Ian and Catherine Emerson and their discovery of his 1890s article published in a church magazine,which they republished.
George Sowden's recollections of the Brontës
George's memoirs affirms my own view of Arthur; that Arthur Bell Nicholls was much more than it generally believed. As Charlotte said of Arthur, ( and I have her say it in the story) that he was "one who has to be known to be appreciated". Arthur's day book is also full of poems. Copied from popular newspapers it's true, but none the less heartfelt and meaningful to him. His stance, in my view, is that plain bread can be nourishing too; something Charlotte came to consider.
I am also posting a link to my You Tube channel where I uploaded a  video for the stories. I made it awhile ago and thought when it was made I would be publishing the whole novel at once. But what it says, that I plan to publish in 2022, still holds true for a group of stories beginning to appear in 2022.
The Brontes. My Bronte stories
I've made such videos for author friends for years. It was fun to make one for myself! The music is from the 1955 film " A Man called Peter" by the great Alfred Newman.
And now,“ Miss Emily's Stone” 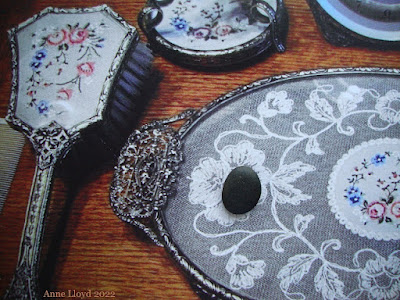