Charlotte Brontë exhibit at the Morgan 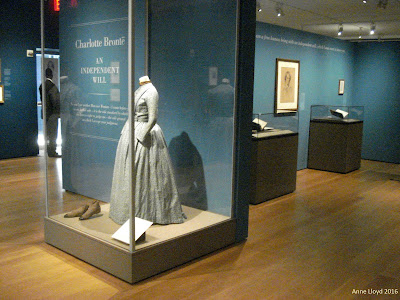 In honor of Charlotte Brontë 's 200th birthday , The Morgan Library in New York is having, what can only be called an historic exhibit.  On display , for the first time in American, are both the George Richmond 1850 portrait of Charlotte and the famous" column"  portrait of the three  sister by their brother Branwell.

I  never expected they would leave the UK. Branwell's  portrait of his  three sisters is usually always on display at the National Portrait Galley in London. But because it is subject to fading, the 1850  chalk  portrait of CB  Richmond is not normally on display even in the UK...but here it is in New York!


This is the actual picture that hung in the Parsonage from 1850- 61 and then spent 40 years in the Irish  home of Charlotte's husband, Arthur Bell Nicholls. This is the portrait  he asked to have brought up to his bedroom as he laid dying in 1906. It was there as he spoke his last words." Charlotte, Charlotte" over fifty years after her own passing

Arthur Bell Nicholls bequeathed this precious portrait  to the nation  and it has been at the National Portrait Galley since...now until Jan 2nd 2017, it hangs  in New York

Also in Arthur's home, but unbeknownst to anyone until years after his passing, was the column portrait. Today we have seen these images so many times, it's hard to imagine at time when they were unknown or not housed in museums.


The column (so nicknamed because Branwell's ghostly , painted out figure makes a column) was  found folded up on top of a wardrobe. ABN's 2nd wife, Mary Anna , who resided in the home for 40 years as well. She  had never seen it before and did not know of it. It's interesting to ponder on the very  different treatment these two pictures received. I rather think Arthur found the painting of the three teenage Brontë girls painful, knowing their fates, and this is why it was folded away and nearly  forgotten.

The Richmond however shows CB with a happy expression ...it is amazing to see in person. It's unlike any of the dozens of its prints  I have seen in books, postcards  and such. I can understand Arthur's love for it . Charlotte's lovableness is there

But these two pictures are just the beginning of this marvelous exhibit. Also on display is the manuscript of " Jane Eyre" , from the British Museum,  one of Charlotte's dresses from Haworth Parsonage...actually I simply should just post a list, because it's rather stunning  how much  there is for the Brontë   fan to feast upon.  I was asked to give my impressions of the show, but really it was too overwhelming for me to do so in a sensible manner!

The Morgan has  its own  impressive collection of Brontë documents ....well let me just post the list. It is not complete

Branwell's column painting of his sisters

Both in the USA for the first time

Letters from CB to William S. William about the passing
of Branwell and Anne's decline

A copy of Currer, Ellis and Acton Bell  book of  poems

CB's handwritten manuscript of " The Professor"

A manuscript of Anne's poetry

A manuscript of Emily poetry
A story in Branwell's hand

Oldest photo of the Parsonage

Mary Taylor's personal copy of Jane Eyre, CB sent
to New Zealand and Mary's letter to CB about it

Contemporary published editions of all the sister's books

A good many drawings

Rev Brontë 's copy of the book of Common Prayer

We will not see such a collection in one place  perhaps until Charlotte's 300th birthday!

This Dec will be four years since I felt the call to begin my Brontë novel. I have been writing it continually since. I believe my hope was eventually the scenes  would eventually  meet up to create the book! But that's not how it goes. You have to create a whole from the parts and they are different entities altogether. I'm learning all this on the job. Right now I am putting everything I have written in chronological order.

Scenes still  come in almost daily  and I write them down. I always put a year and a title to whatever thought comes though...otherwise even I would have a difficult time always  placing the scene in its proper  place within the Bronte story!

When I take the " just plunge in "  approach to such an endeavor I tend  to not think too much about the process . It seems like trying to capture a butterfly by chasing it . Wiser to stay still and observe as it lands on one's sleeve. Eventually, however,  you must deal with  the process , but by then one has something to work with. Now I can sense the book is ready to be shaped and I'm looking forward to pulling these scenes together into one piece.

In my  exploration of both painting and writing, projects advance when the task becomes  fun, and not a job I should do. When it's fun, you have an energy that is absent from a chore . Every chick must leave its shell, but only when ready

I periodically reread Charlotte' s major letters and I find the practice  invaluable. They haven't changed over time , but one's perceptive does...and I have learned to really read again items I have read many times over the years ...we tend to think we know the contents and glace them over it.  In this way gems are missed. Some of CB's letters one must study word for word. She says everything, but often it's hidden in an understament.

I'm not painting at the moment since I want to get this book in shape. However I did paint a pretend  transom for over our front door( the original was covered over! ) and will post a photo when it is installed. I decided to make it as real as possible. I hope it will fool the eye for at least a few  moments !

I do plan to paint other Romanov pictures in the future , but it's full stream Bronte novel right  now

Okay, back to work!