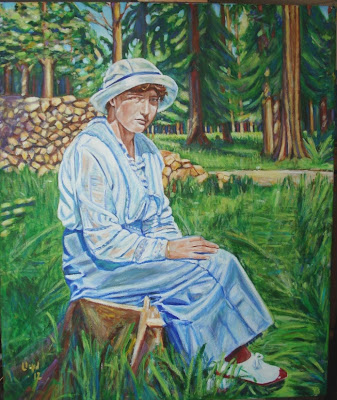 After 8 and a half months, my painting of Anastasia Nikolaevna is finished! It's based on a photograph taken in the park of Alexander Palace during the summer of 1917....and so Anastasia and her family are in captivity

This is a fascinating photo. Somehow this young woman best known for being an impish child , makes a golf hat a crown and a tree stump into a throne. Usually I'm not greatly interested in the family's royal heritage. But here, Anastasia shows me what it's all about. Whether by breeding or training or both , she has an innate dignity that has been brought sharply into focus by her circumstances. The world has turned upside down seemingly over night. She , her family and Russia face an uncertain future. But she's facing it with remarkable self possession for one so young. She has just turned 16.... 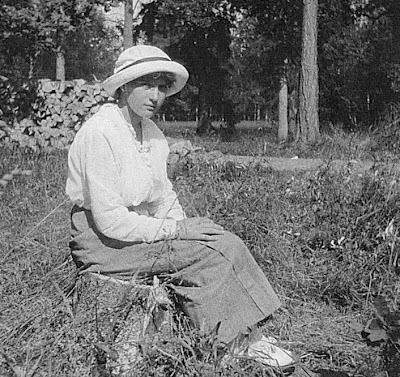 Well, her body language is so, yet her expression is unsettled. After years of wondering, I believe I know why...she was not quite ready for the photo when it snapped.

I say this because after many years, I finally realized what appears as the Imp's hand, it not all hand. There is a ribbon of skirt above her hand, and with her hidden index finger and thumb, she is yanking at her skirt that is caught on the sharp edges of the tree stump. She was not 100% ready for the snap of the brownie
camera


The mystery of Anastasia "huge" hand.

For years I wondered at the large hand in this photo because of the four girls , I believe the Imp's hands were the smallest. It was only after months of looking and painting, I saw the situation. Finding the gold bracelet was a help, that told me the limits of her wrist. But also looking at the creases on her lap was key . They line up with where her fingers would be as she's pulling on that material .Those creases are there because she's pulling. In the black and white photos, the shirt and hand share a very similar grey and highlight. So the ribbon of skirt became hand in the photo print.

Once I saw it was not just her hand , I painted a small line of skirt above ( indeed one can see some skirt above her right sleeve as well ...this is discovered ribbon but a continuance of that) ....and now we see Anastasia Nikolaevna's hand as it was . 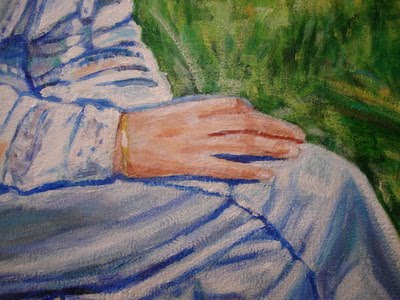 What teenager would not be unhappy if the camera snapped before they were ready? Well at least this is how it now seems to me.


The Swan
The name of my painting is "the Swan" and the thought behind it is: Anastasia reached at least the beginning of her physical maturity before she and her family were murdered a year later in the summer of 1918. She was no longer a child, yet that is how history sees her. I aimed to change that a bit.

I see a remarkable young woman here: on the threshold and full of adult potential. One is keenly aware of what was lost when she, and we ,were robbed of her natural life. But I did want to say that over the course of the painting I gained a clear sense of Anastasia's shyness. Yes, Anastasia Nikolaevna, shy. At least as she emerges from childhood to being a young woman. Shyness can be also hidden in outlandish pranks , roughhousing and cutting mimicry.

Anastasia Nikolaevna had many nicknames, "The Imp" , being the most famous. I would add another: "Quicksilver". She was constantly on the move and darting about. In many family photos, someone is holding on to The Imp to keep her put. But in this photo the young woman has composed herself. Here , in a lighting flash, we are given a glimpse of what was and what could have been. At times my emotions welled up and it made painting difficult 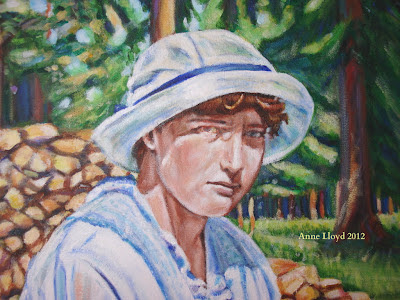 Close up of The Imp

It was most likely Anastasia's sister, Marie, who took this photograph. Marie was a keen photographer as they all were. But Marie learned how to develop film and print photos as well. No easy matter at that time . In our digital age, very shortly people will forget the mental and even physical intensity film developing and photo printing required .

Now we press buttons, but back then there was chemicals, timing , working in the dark...on and on. The down side of Marie's interest for us today is there are more photos of the others in captivity than of her. 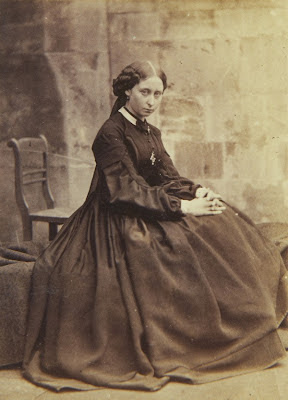 Anastasia and her grandmother, Princess Alice

Anastasia Nikolaevna Romanova was the great granddaughter of Queen Victoria. Her grandmother, was Princess Alice, the Queen's second daughter. I found a photo of Princess Alice that goes nicely with the photo I used for Imp's painting

The painting took 8 1/2 months. But far from being bored, I constantly discovered new things in the photo though out that time. I posted earlier about discovering a gold bracelet on her hand ... I just discussed her hand, and since posting my video of the painting on You Tube, I discovered her hat had a triangle of bow at the back of her head. I had missed it completely ..it's shares the tone of the trees...but looking at other photos of her hat, I realized it could be there, then I could see it.

These details swim up or pop out...but it's rare week when one doesn't come forward . Let me just say it's a great thrill seeing a detail that has been overlooked for nearly a century . Invariably they add to the picture....every hidden detail is a gem that suddenly flashes and then one sees it . I know my eyes get a big as Marie's " saucers " at that moment.

I could start it over tomorrow and still find it fascinating....true of every painting really

While I was never bored, I salute and thank those who kept asking after the painting all this time ! I believe I answered these inquiries with the same sentence for months, "I'm finally getting that skirt " It was nice people kept asking! lol One never knows how long a painting will take., each has its own requirements While thankfully her face came though steadily, the skirt was a real challenge of months duration. The hat was very difficult as well. I was painting both til the end , and in the hat's case, beyond!

I take photos of the process to try and understand how I'm able to paint the family as I do... but it's still unexplainable to me, besides "something" happenings in the studio as brush meets canvas and I'm smart enough to see it and keep it It's difficult to state the blessing I feel, as a Romanov enthusiast, to be able to somehow express my emotions in the creation of paintings of this caliber...perhaps only other Romanov fans can understand. It's a dream come true. 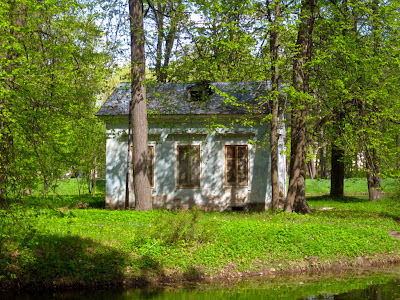 Children's Island
Unless you see a photo, it's hard to believe just how green the grass and blue the sky is there.... almost surreal . So this was hugely helpful as I was about to finish...it certainly informed the colours . Thank you, lynn! Today we know the family from black and white photographs, but they lived in a very technicolour world . Adding that colour back is one of the joys of this work

Anastasia Nikolaevna : the swan 1917, is now installed in my Romanov gallery. She is a commanding presence. What is remarkable is scale wise, she would fit right in to her sister's earlier painting. Now OTMA is complete . 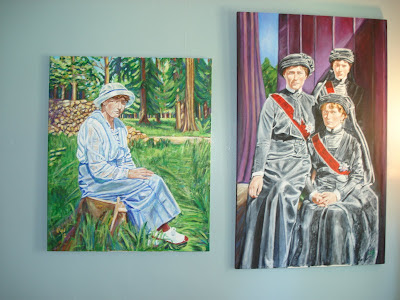 Imp in the gallery

Of course Anastasia has her video, in fact she has two. The main one shows Anastasia though out her life then the progress of the full painting. The 2nd video is a short one showing the development of her face over 8 months. I wish to thank my friend, Helen Azar, for her help with the tittles in the main video. It adds so much!

The music of the main video is from two film scores by the wonderful composer, Rachel Portman : " Lake House" and " One Day "


My next major painting 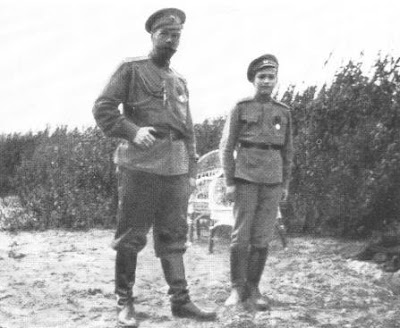 The Tsar and Alexis on the Dnieper River 1916

Their faces aren't very clear, I will use other photos to help. An exciting aspect of my art work is bringing clarity where we don't have it otherwise. I am itching to start this painting of father and son on the beach at dusk. I'm so fortunate to have friends who know the uniforms and are eager to help me in that regard. In art, military uniforms are like religious vestments...they have to be right!

This time on the river in 1916, could easily be the happiest of young Alexi's life. His health was fairly good and he was with his beloved father in the military atmosphere he adored. The canvas is 36 X48