I came to my blog to see just when I posted last and was shocked it was in February....surely it was mid March? But no, it was Feb 22 ...in that  post I said I hoped to finish my Anastasia painting with in two weeks

Art  time is not regular time . Often one will say 10 minutes has passed , only to find it's been an hour.
The clock in my studio is set 15 minutes fast just so I have a chance of being timely for another activity.

Part of the attraction of  doing art is getting lost in Art time. Paradoxically, we are rarely less or more ourselves during it. The everyday cares and even our ideas about ourselves slip away in artists absorption....
It's a type of sleep or dreaming  and time is like wax in the sun during it...quite mutable

So I said two weeks on Feb 22...that was two months ago and I'd still say I'm two weeks from finishing  . But since that time and now  the painting  has gone to another level or several  really ....which seems to happen when a major element is added to a painting ...( in this case it was finalizing her hand and foot.)  And when that happens , then everything else is up for reassessment as well, since it all has to fit together

The Imp's hand and foot are two hugely  important features in this photo and painting. For 7 months I have been trying to create that marvelous line that goes from the Imps face , hand and  foot . 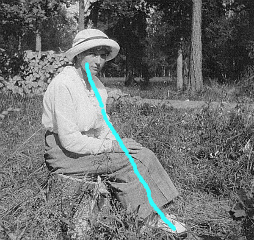 The line
It's almost as important as getting her likeness to me...and it's been a battle...well everything but her face and the landscape as been a battle royal. I began this painting in early Oct . Recently while cleaning out my email sent folder , I ran across a mail sent to a friend where I say " I'm finally getting a grip on that skirt" . When asked , I would continue to say the exact same thing  for the next 4-5 months !

I have painted that skirt untold times...( It's caught, back and front ,  by the sharp edge of the tree stump and this causes complex lines all across it ) however it's always better after a painting secession  and it needs to be said  that while I appear to be painting the same painting of the same photo for 7 months now, it's never the same painting or even the same photo...just yesterday I noticed the Imp was wearing a gold bracelet...how had I missed that? I looked for jewelry! Yesterday the bracelet's  reflection in the sun  finally caught my eye behind the grass stalks. 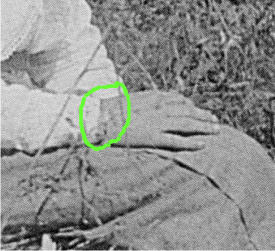 The act of painting changes the painting, and one's ever shifting perceptions  change the photo. In order to do justice to both, I am lead deeper and deeper into this photo's moment of time, this young woman's eyes and my unexplained, but deep, empathy for her and her family....this is why I urge some creative work on the Romanov enthusiast , whether it be art or writing ,  because nothing brings one closer to  them that getting lost in ART time. One can certainly say it's a delusion...perhaps, I wouldn't know. However I would say the final painting can also cause one to wonder. The three people who have seen her lately in the studio were struck dumb. It's a powerful experience to see the painting  already ....particularly for those who know what Anastasia  looked like, that's  the real test.

Paint on the canvas is never just paint  on the canvas...it's a language from the heart and mind of the artist.  A  language made visual though their brush strokes into a type of emotional hieroglyphs , often perfectly understandable to the viewer on at least the subconscious level... and this understanding, or feeling surprises our regular time every day self often . One is after creating on canvas a world free from its basic, 2-D  static nature and have it  appear to about to move in the next moment ...One is after a suspension of time.

So I would say I'm two weeks away from posting my Imp...but that could be in Art time or regular time...hard to say .  lol 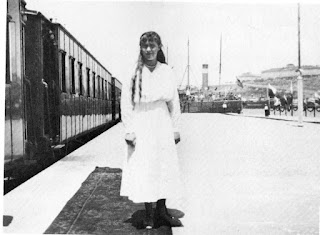