Painting update and a video 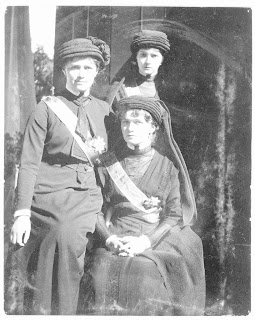 I have started month 4 on my painting of the three eldest daughters of Russia's last Tsar depicted when they were about to attend the last state funeral of Imperial Russia in 1915. The painting is taking some time! But it's fairly complex arrangement. Three portraits and just as challenging, the mourning out fits! I have discovered a great deal about a photo I have known for 40 years.

For one thing , Olga Nicolaievna, the Grand Duchess who is sitting, her veil does not end at her waist as I thought all this time. That is simply a fold. The veil goes all the way to the ground!It's all that material one can see on our right and Olga's left. She and her sister, Tatiana must of seemed almost tee-pees of grief when they stood. Because they mostly wore the same out fits, even though Tatiana is in deep shadow, we have a good idea what she wore this as well. This is a help for an artist...you have 2 chances to see the garment.

The black on black embroidery on Olga's dress was a discovery as well. It's in two bands on her tunic and then become one strip down the middle of the skirt. Marie, the Grand Duchess sitting on Olga's chair arm, is dressed in a less grown up manner. She was just allowed to put up her hair, a rite of passage at the time. The fourth daughter, Anastasia, was considered too young to attend.

Really the effect of the elaborate clothes, their youth and the stupendous jewels of their orders of St Catherine brooches must of been dazzling. The reflected sun light from the diamond and ruby brooches splash the shadows. Olga's face has pin points of light from Marie's order. The brooches can be seen pinned on each girl's sash, which was bright red with sliver piping on either side. 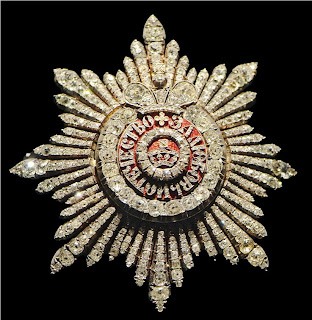 The words read : "For love of fatherland"

The Grand Duchesses are outside, and I gather are awaiting transportation to the funeral of their father's cousin, Grand Duke Konstantin Konstantinovich . The girls knew him and his family very well. The Grand Duke had lost a son early in WW1 and never recovered from this loss

I'm so close to being finished that I will wait to post the completed painting.
But I wanted to post something of an update. It's been interesting to be engaged in a creative project that takes months. It's a journey and ever evolving...we live in an age of instant potatoes and gratification...but I have learned to enjoy taking my time and the stops along the way. Really the photos of the Romanovs seem to demand this as they have endless secrets and only close study can reveal them.

What is also taking time is the size of the painting. But I will mostly likely continue to create large paintings of the family. It enhances the impact, but also it's easier to get a good likeness if a painting is bigger...you have room to develop the portrait.

Another item I wish to post is a short video I made about the two eldest daughters ,Olga and Tatiana, known in the family as The Big Pair. My painting of them in their WW1 nurses uniforms last year started my Romanov painting adventure.