It was the worst of times,it was the best of times.
It's been a difficult time for everyone. We have all had challenges during these past months and very many have had tragedies.
During this time it's has been my portion ( as CB would say)  along with the challenges, to be having one of the best of times, in writing and typing my Brontë novel. I love every minute of it. I'm lost in the Brontë world and I am so blessed to have this in my life. My brain and heart teem with so much to tell of the Charlotte Brontë and Arthur Bell Nicholls story, that I hope I can bring it all forth....scene after scene tumble into my head. Now comes the typing, and still more comes though. 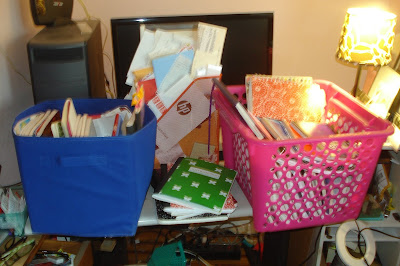 Here is a photo of the book's notebook bins. Each bin contain three layers of composition books filled with writing for my novel. Since taking this photo, I found another bin I had forgotten about and created 5 more note books!There is so much to tell of this story, at times it is overwhelming how much material I must pull together. But it is not so when I type, so I type with my one finger as much as I can!
It maybe a wonder that I could be writing the same book these eight years. But I have not been writing the same book, I've written a good number of books! Because this book is ever changing into something else. The writing that began in 2012, bares little resemblance to today's writing and the book has now so expanded in its scope, and depth, I've given up predicting when it will be finished.
There is so much to say and it must have its say.
Just as an example, one of dozens; when Arthur purposed to Charlotte in Dec of 1852, Charlotte asked him if he" had spoken to Papa? "Arthur said he " dared not." This has usually been viewed as simply a failure of courage on Arthur's part. But nothing could be further from the truth. It was out of Arthur's concern for Rev. Brontë and of course, Charlotte.
People forget Rev. Brontë had a serious apoplectic attack just a few months before in the summer and had barely recovered. They also forget the on going failure of Patrick Brontë's quest for clean water for the village had, by this time, taken a great toll. Rev. Brontë had fought for it for years and after the victory of the Bandage report in 1850, Patrick believed his wish for clean water would finally be effected.
However it faced rebuff after rebuff and at the time of Arthur's proposal, the initiative seemed in ruins. Consequently of at least these two reasons, in Dec of 1852 , Rev. Brontë health was in a defalcate state.
But it was not just a matter of Patrick's heath. Arthur also knew his Pastor's strong feelings about Charlotte marrying at all and well knew the explosion that would follow, if his own, penniless curate made an attempt in that direction. In my mind Arthur "dared not" speak to Patrick because he feared his Pastor would become so enraged, he would expire at Arthur's feet if he had dared to speak to Patrick directly.
We know Arthur was absolutely correct in his misgiving because Papa indeed had a dangerous fit ( "not to be trifled with" as CB said ) when Charlotte told him and even though she immediately assured Papa she would refuse.
To simply call Patrick's feelings at that time " anger", does not described their true nature. They were at the boiling point of eruption for months afterwards. Charlotte finally had to ban the topic from the tea table and letters because the effect it would have on Patrick's heath. ( and her own!)
That is one of many, many cases where I take the known history" He said he dared not" and flesh it out with the history that surrounds it and then communicate all that in a few lines in a novel!
So as I say, I have no idea when it will be done, but I'm always working on it. Charlotte Brontë thought Thackeray was the greatest author of her time. She heaped praise upon the man, indulging in her " abiding sin of enthusiasm". Yet when they met in life, it was an disquieting, even painful experience for both of them.

It seems when Charlotte read W. M. Thackeray's works, she felt he was like minded person, supremely skilled in lampooning society in all its folly. In her mind, they sat comfortably together in the governess corner of a fashionable drawing room,exchanging cutting, but fitting, observations about the revelers before them.

However when Charlotte met Thackeray, the man, she found her friend had deserted the side lines and was fully enjoying every frivolous aspect of society he lampooned in print. Charlotte believed they had condemned all that together. Thackeray indeed condemned society, but he also loved it to the hilt as well. This was a shock for Brontë.

When like mined people have different coping techniques, relations can difficult. I'm impressed how much Thackeray liked Charlotte even after being lectured by the little provincial patch! And he kept trying to please her! One does not feel such efforts was usual for him.

But ultimately Thackeray feared the rage from love privation that  he found in Charlotte's work and herself, too much for comfort. They were poles part in their everyday lives and would not draw well together

However when Charlotte married, and Thackeray knew a  "Tomkin" husband had somehow arrived, he sent Charlotte a wedding gift of a wonderful copy of “Aesop’s Fables,” that proved he understood Charlotte better than she had perhaps realized.

It was beautifully made ,a classic, in French and had wonderful print illustrations. Everything that would please her in such a gift. Charlotte showed it to others , such as the Sowden brothers, with great pride. The book was proof of Thackeray’s ultimate understanding and appreciation .

I have two new Romanov videos

The Romanovs, Their smiles

Okay, back to work and take care! 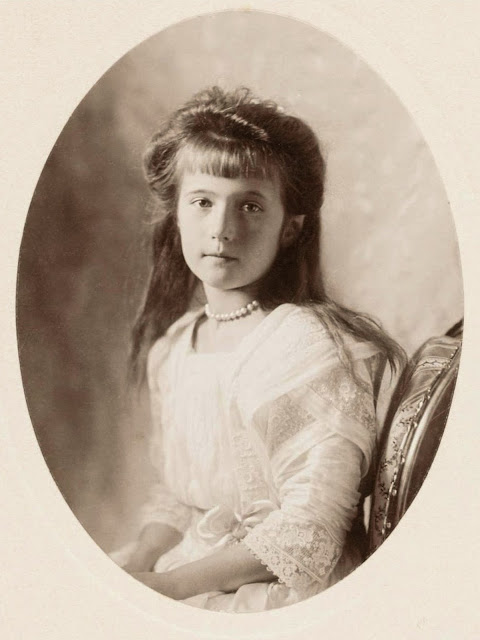