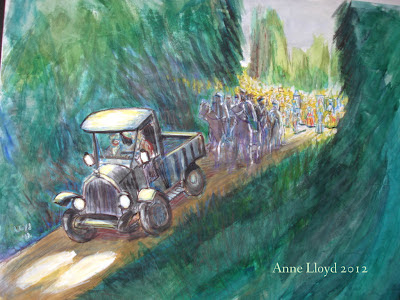 July 17th is an important day in the Romanov enthusiast's world. Of course July 17, 1918 was the day that Russia's last royal family and four others with them were killed in the cellar of the Ipatiev House in Ekaterinburg , Russia.

Ipatiev House itself was torn down in 1977. It was an effort to stem the growing tide of pilgrims seeking to pay homage to the royal family. This was same solution that was tried in 1918 when the family itself was killed, and it had the same useless effect. For on the ruins of the Ipatiev House, a cathedral , called " Church on the Blood "was built and people come from across Russia and the world to pay homage now.

In the early morning of July 17th 1918, a truck carrying the remains of the family and thier four companions, left Ipatiev House . Its destination was Ganina Yama, a 9' deep pit in the Four Brothers mine 15 km north of Ekaterinburg . There the 11 bodies were thrown down into the pit. They were not there long, as the pit proved completely inadequate to hide the corpses.

Most of the remains were buried in a mass grave four miles further away, where the truck, simply got stuck in the mud . The remains lay hidden there for 70 years . Two of the victims were burned separated and those remains were found in 2007

Today , after an all night ceremony, tens of thousands walk in procession from the church following the path the truck took that July morning to the mine pit . This procession grows yearly.

These two events, the truck in 1918 and the processions of today, became one in my mind. In a very real way, the people were following that truck and certainly the truck leads the processions. 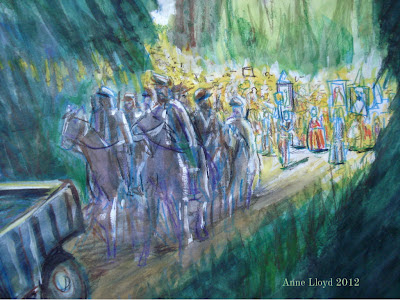 So I made a drawing to illustrate this vision and also a video.


After 8 and 1/2 months, I have finished my Anastasia 1917 painting, "the Swan". But I got caught up in completing the July 17th drawing and video in time for today and so have not posted about that. However it's just as well. Because I already found two things I had missed in all that time and need to add them!
Her post will be soon!